Can irrigation water be improved? 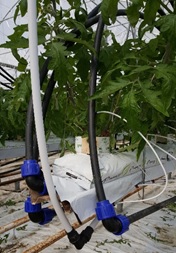 Horticulture practices – certainly in greenhouses - has been lifted to incredible heights with regards to optimum nutrition, watering times, hygiene, yield per sq. metre, etc.. However there are still huge problems with regards to controlling diseases and insects. So it can be that a grower does everything right – same as every year – and suddenly his entire crop is decimated by Fusarium for instance. Why? He didn’t do anything different than the previous year, same variety, same hygiene, same nutrition, same crop spraying, everything the same as every year and still all of a sudden wipe-out… why?

My thought is that it is due to the main ingredient farmers use and that is still not fully comprehended: water!

Water! We use it extensively – to produce 1 kg of tomatoes uses between 15 – 60 litres of water depending on where they are grown. But we do take water for granted and treat all water as if it’s all the same no matter where it comes from… we clean it up, adjust the pH to the desired level and off it goes. It’s used to irrigate our crops, to apply chemical fertilisers and pesticides/herbicides, etc…. The main concern is generally: pH, micro-organism pollution & mineral content.

But is all water equal? Are pH, micro-organisms & mineral content the only important parameters we should consider when using water for irrigation?

Water looks and feels the same but is it really? What else could affect water quality that we are not looking at? What further parameters should we include to get the best out of the water we use for our crops. 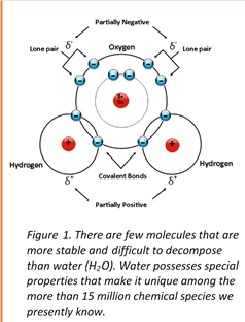 Oxygen depleted water causes oxygen poor soils, lower soil bacterial activity, stunts plant development, causes lower yields and increases disease problems. It will create an ideal environment for nematodes as they prefer an oxygen poor environment – in fact the easiest way to control nematodes is to insure that you have an oxygen rich soil.

Water oxygen deficiency is easily remedied by practising hyperoxygenation – i.e. providing a surplus of available oxygen which is preferably independent of the water carrying capacity of the water. Oxygen rich water makes for oxygen rich soil, oxygen rich plants, healthy micro-flora, soil decompaction, higher water holding capacity of the soil, etc…. it’s a worthwhile practice that can save you a lot of money.

The consequences of Oxygen Deficiency (OD) on the root system of tomato plants in off-soil culture at the beginning of the flowering stage were assessed over a 72‐hour period. OD of the nutrient solution had immediate effects on the water and nutrient uptake of the whole plant. The root asphyxia of a tomato plant caused a 20 to 30% decrease of water uptake after 48 hours. After 10 hours it also leads to the end of the uptake process of the nutrients except nitrates. Oxygen deficiency also reduces a plants leaf growth and photosynthesis capacity.

Rockwool, when allowed to drain to field capacity contains about 80% solution, 15% air pore space and 5% rockwool fibres, but because of its greater water holding capacity, it stays saturated for a long time after irrigation, and slows the diffusion of oxygen to the core where root mass concentrate (Morard et al., 2000;Carazo et al., 2005). This easily causes oxygen deficiency making plants more susceptible to disease and more attractive to insects.

Other considerations with regards to water quality

Water oxygen levels are of vital importance as mentioned above, but in my opinion based on many years of practical experience and observations there is another factor that is of great importance. Unfortunately it is something that has received very little consideration as its not visible, difficult to measure and hard to explain…

As an Agricultural student I remember being shown 2 seemingly identical plants which were placed under a insect proof net:

Inside the net insects had been released and the aim of the experiment was to determine if one plant would be more vigorously attacked by insects than the other. The result showed that the plant on the chemical fertiliser diet was the main focus of the insects.

It was explained that this was due to the infrared radiation emitted by the plants. Insects apparently can see infrared and are attracted to some frequencies more than others.

Organic plants produce a higher frequency infra-red radiation that insects are less attracted to whereas the chemical fertiliser plant produced a lower frequency infra-red radiation that was far more appealing as it showed weakness. In simple words the role of insects is to destroy the weaker plants – in the same way as for instance lions in Africa generally feed on the weaker, injured or sick animals so that the strong can prosper and multiply.

Infrared and energy vibrations of water

Energy vibrations refer to the oscillating and vibrating movement of atoms and particles caused by energy. Everything on this planet produces an energy vibration field with its own unique vibrational frequency range, and water is no exception.

Quantum physics describes the universe as nothing more than vibrating strings of energy! The velocity and frequency of vibration depend on the substance: molecular weight, molecular structure, etc. The vibrational state of a molecule can be detected in a variety of ways. The most direct way is through infrared spectroscopy, as molecule vibrations typically create an amount of energy that emits infrared.

With water, the frequency vibration or energy is further influenced by pollution, chemical content, origin, oxygen levels, mineral content, etc… So water that is polluted, oxygen depleted, recycled or chemically overcharged will not be producing the optimum energy vibration; in other words the water is not vibrating at its prime (optimal) resonant frequency and this means it will have a lower frequency vibration and thus a lower infrared radiation – i.e. more attractive to insects and to disease.

It is possible to examine the structure of water under a microscope. From this it is possible to distinguish between all the different types of water: osmosis water, bore water, re-cycled irrigation water, rain water, chlorinated water, river water, etc… The water crystals are simply very different.

Under the microscope it can be seen that:

I have done some tests on this and we actually were quite surprised that the effectiveness of fertilisers and pesticides was increased significantly when the treatment water was hyper-oxygenated and the energy of the water was increased. This simple method could help farmers make significant savings on the use of fertilisers, pesticides and herbicides and at the same time obtain better results.

Water makes up 80% of a plants structure, it’s also 80% of most fruit and vegetables. To me it seems logical that water being the main “ingredient” used it should be of the highest quality, should be the primary focus and certainly not taken for granted. We are still learning about what makes good water, even scientists don’t fully understand everything about bulk water and how it interacts. But water, oxygen and the unseen energy vibration are keystones to how our planet functions and need to be recognised for their importance. After nearly 40 years’ experience, I have seen that water functions better when this is recognised and incorporated in its use. Water lives, needs oxygen and like everything else vibrates, so let's use that to our advantage.

2. Oxygen Deficiency as a Cause of Disease in Plants, Herbert F. Bergman

Solution for dairy ammonium emissions that are crippling the Netherlands